Why a pistachio plantation?

What we do for you

So, what is needed to start a pistachio plantation?

Pistachios have their female and male flowers on different trees. For every 10 female trees one male tree is required. Pistachio trees consist of a rootstock with an optimized root system that allows the tree to take up water and nutrients from the soil easily. When the rootstock has grown sufficiently, a graft is inserted onto the rootstock. The graft is optimized for pistachio production. For the first 3 to 4 years the pistachio tree is allowed to grow. Flowers are removed and no fertilisation takes place. All the energy is used for the growth of the tree.

It is best to determine the type of soil and its quality before selecting a rootstock or pistachio variety. Given the variations in soil texture in our district, it is very advisable to have professional soil analysis done. If in any doubt this should include a verticillium test. The soil needs to contain a certain amount of air, or needs to be sufficiently permeable to air to ensure that the roots get oxygen. The right soil could be sandy all the way through to clay soil. According to studies, we can select a suitable rootstock or variety for up to 40% of clay soils, provided that analysis is done on the soil permeability and that the slope gradient of the terrain is known.

Our district has a very suitable climate to cultivate pistachios. We enjoy long summers with high temperatures and cold winters, which are necessary so that the trees accumulate enough cold hours each year. With help from the nearest Meteorological Institute we can determine the amount of cold hours in the region. With this information we can select the variety, since they need differing amounts of cold hours on a yearly basis. Frost during spring may cause a lot of damage to the flowers, though this is very unlikely to happen in our district since the pistachio flowers in late spring, from April onwards.

The rootstock is the stem onto which we insert a graft of the selected pistachio variety. The rootstock that we are going to use will depend on several factors. This includes the type of soil, irrigation availability, and the presence of verticillium in the soil. Depending on your type of soil you will need either a very resistant rootstock or an energetically growing rootstock.

Taking your time choosing the right variety of plant is very important. Further you also have to choose between buying a grafted plant or only buying the rootstock and grafting yourself in the field. Both options work well. Grafted plants, when growing on your plantation, have the advantage that they will start production quicker. But the biggest advantage is that the plantation will be uniform. When you choose to graft your own plants you will always have the risk that some grafts won’t take.

Lately the percentage of the successful grafts done in the fields is higher than in previous years, as awareness improves about the factors which improve success.

There are many varieties of pistachios: Kerman, Sirora, Larnaka, Mateur, Kastel, Avdad, Aegina etc. Determining the most suitable variety for your plantation depends mainly on the hours of cold weather in your region, irrigation availability, and the needs of the market.

Given this there are several varieties that work well in our region: Kerman, Sirora and Larnaka.

Kerman is the reference variety, one of the highest rated pistachio varieties, with excellent taste and a white hull (normally with a big size) which is attractive to the human eye. This variety needs high amounts of cold hours (1000 cold hours) in winter. Many parts in our district fulfil this need.

Originally from Cyprus, the Larnaka variety is both vigorous and productive. The Pistachio nuts from Larnaka are medium sized and elongated with a great flavor. This variety is better suited to warmer areas of Spain and needs just 700 cold hours each winter. Flowering is early.

Created in Australia, Sirora needs 700 cold hours each winter. This is a vigorous variety with high nut production. It has medium/large nuts which are long and round with an attractive appearance. Sirora blooms earlier than Kerman.

As known, several of the rootstocks of the pistachio trees are designed for dry soils. Irrigating a dry plantation can increase pistachio harvests by 50 to 80%. Irrigated plantation are less exposed to differences in yearly production.

This does not mean that a plantation on dry ground does not yield well. We couldn’t be more privileged to find ourselves within the ideal region and climate for pistachio production.

Many of the terrains in our region are dry land. Due to the texture and depth of the Ronda soil, the pistachio tree grows as well as they would on irrigated land in other parts of Spain.

Today we cannot ignore the worldwide pressure on our environment / ecological system. To protect and heal our land and to produce healthy consumer products the only option is to produce agricultural products in an ecological way. We have the knowledge and facilities to set up an ecological pistachio plantation. If you have questions, please contact us.

The harvest takes place in September or October. A yield of approximately 1000 kg/ha is normal starting in the 7th or 8th year. The harvest can be done manually with vibrating tools, which can be very effective and quick.

It is advisable and cheaper to mechanise the harvest from the 6th or the 7th year onwards, using a tractor with a special collector and umbrella, which prevent the fruit falling on the ground to ensure maximum quality. The most important part is fast transportation of the fruit to the processing facility.

Once harvested, the fruit needs to be processed (phase 1): It is peeled and dried up to a humidity of 6-8% within 24 to 36 hours. This to avoid the risks of fungus and aflatoxins.

After drying the pistachios to a minimum humidity, the process continues to phase 2. This separates them according to whether they are open/closed and with fruit/without fruit. We need to sort the fruits that are open to check for defects and colour. Only the ones that have no defects will pass the calibration (phase 3) and the subsequent storage. A pistachio with uniformity and quality will do well in the best markets.

We work together with renowned companies that supply rootstocks for pistachios, like the Terebinthus, Atlántica, UCB1 and grafted plants. We deliver technical advice for the exploration of your terrain, soil analysis, advice on best rootstocks etc. We also advise on educational courses on plant pruning etc.

About 12.000 to 7000 years ago Pistachio trees were indigenous to Uzbekistan and Tadjikistan. From there Pistachios found their way to the Middle East and later to the North African and European Mediterranean. In the days during the Arabian occupation of Spain, Pistachios found their way mainly to Andalusia. Around 1980 pistachios were introduced again in Catalonia. In 1986 commercial experiments started in Castilla La Mancha. From 2005 plantations were started in Extremadura and Andalusia. Commercial pistachio sales started in 2011 in Andalusia.

In 2014 Joaquín Becerra (an agricultural contractor working in the Ronda valley) and Henk van Dalen (a Dutch pioneer and investor, living close to Ronda) had a meeting to discuss the future of agriculture in the area. Henk had just bought 15 ha of land and was looking for an ecological crop, a healthy crop for the land and healthy consumer products as well. Additionally, Henk wanted a crop that would offer a reasonable income for the farmers.

Joaquín was looking for a new, preferably ecological, crop as well. Therefore Joaquín followed a course at the Junta de Andalucia (IFAPA) in Granada, looking at possible new crops for our mountainous area. It became clear for Joaquín and Henk that the culture of Pistachios was the crop that would meet their goals.

Information about the pros & cons of Pistachio cultivation was sought. Many visits were made to Castilla La Mancha and Catalonia, where the leading Spanish pistachio producers and processors are based. During winter 2015/2016 some 3000 cuttings of the variety Kerman were planted on 16 ha.

In 2017 Ronda Pistachos SLU was established.

A harvesting machine has been bought. A “first phase” processing factory was finished in 2018. The first harvest is scheduled for September 2020.

Worldwide pistachio production in 2016 was 523K tons (K=1000). Since 2005, global production of 535K tons is quite stable. Production in the USA and Iran has decreased in recent years.

Production in kg/ha differs significantly: In 2016 Iran produced 150K ton in 250K ha. = 600 kg/ ha. In the same year the USA (California) produced 204K ton in 130 K ha. = 1570 kg/ha. The production of pistachios in the USA is far more efficient (2.5 x) compared to Iran. However, USA production needs lots of water and fertilizer. Iran produces in a traditional way. Both countries have a water supply problem.

Today and in the past the world demand for processed pistachios exceeds production capacity. The pistachios grown in Spain are mainly exported to Northern Europe/Germany in the first place. More production of pistachios is very welcome.

Ronda Pistachios is the first Pistachios processing Plant in our district. We work with the most effective machines for harvesting as well as for phase 1 processing.

Ronda Pistachios is your “Knowledge Centre” dealing with Pistachios farming in Ronda District.  From the first moment of considering to start a pistachios plantation we will help you directly or put you in touch with our connected suppliers. We have knowledge and facilities concerning: setting up a plantation – maintenance of a plantation – harvesting – processing and sales.

After the harvest there are two options:

we may process your Pistachios and you can collect them the next day.

we can collaborate further as we work with renowned companies that commercialize pistachios internationally to get the best prices for the the farmer.

In the press & more information 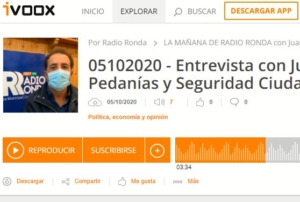 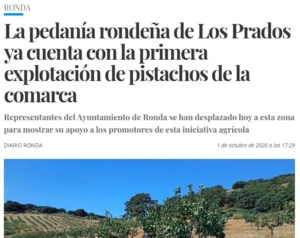 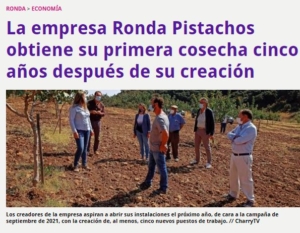 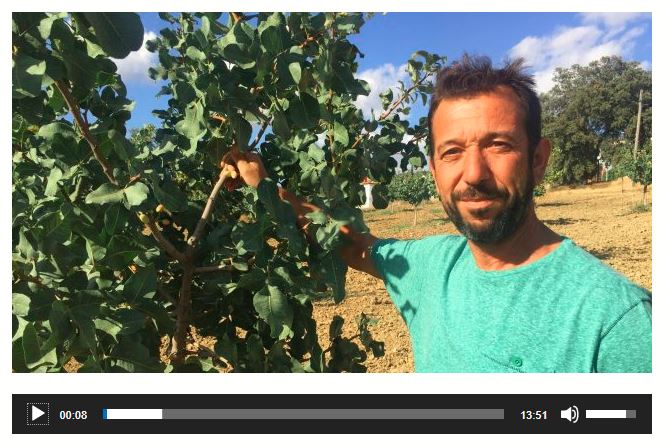 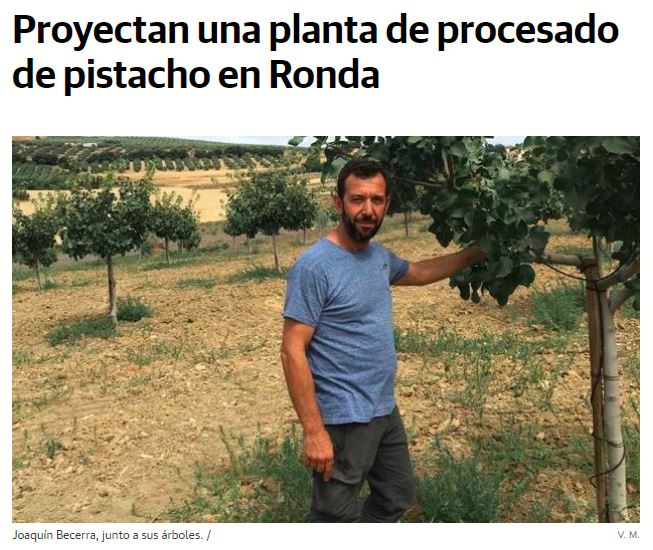